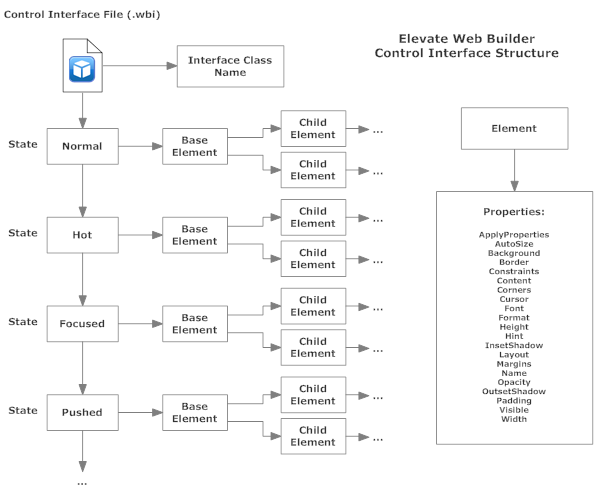 As mentioned in the Application Structure topic, control interfaces are included in a source unit via the $INTERFACE compiler directive and, as mentioned in the Compiling Applications topic, control interfaces are automatically stored in the application's HTML loader file by the compiler, and are automatically loaded at application startup by the global TInterfaceManager instance called InterfaceManager in the WebUI unit.

TControl Interface FunctionalityAs discussed in the Visual Applications topic, every TControl descendant class will create one or more TElement class instances to handle the various interface elements in the control. By default, the TControl class automatically creates an element with the name "Base". All element instances should have a unique name within the context of a control class.

There are several standard interface element names defined in the interface section of the WebCtrls unit that should be used with any controls, if possible. For example, controls should normally always call any client element "Client". This isn't a requirement, but it does help keep any 3rd party controls standardized.

The control interface class name is provided by the TControl GetInterfaceClassName method:


It can be used to return any string that represents the control interface class name that the control wants to apply when the interface state changes. Normally, the value returned here is simply the class name for the control. For example, the TEdit control GetInterfaceClassName method implementation looks like this:

If an interface state is specified that does not exist, then nothing occurs and the visual appearance of the control will not change. If one or more element names in the control interface state do not match the names of the element instances created by the control class instance, then the properties of those elements will not be applied.

If you specify that a property should be applied in any state, then you should normally also specify that the property should be applied in all other states in the control interface. Failure to do this will result in certain properties becoming "sticky" and not reverting to a known state as the interface state of the control changes. For example, suppose that you have created a TBorderButton control that you want to show a different color border when the mouse hovers over the control and the interface state changes to "Hot". In such a case, you'll need to be sure that the ApplyProperties.Border property is set to True for the Base element defined in all states in the control interface, including the standard Normal state.