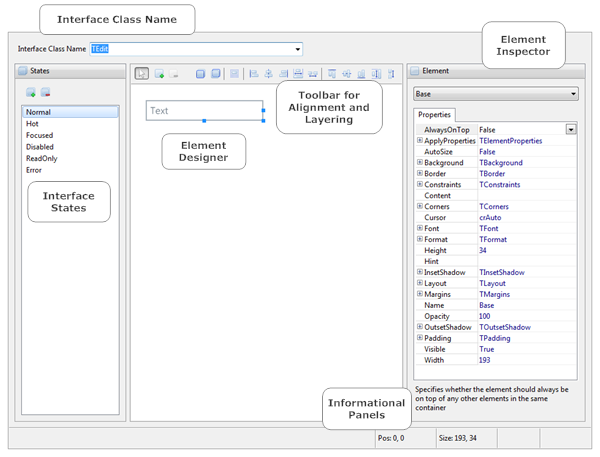 The unit of measure used by the interface designer is the pixel, and the resolution is always assumed to be 96 pixels per inch.

Use the following steps to add a new interface state to the control interface:

Removing an Existing Interface StateUse the following steps to remove an existing interface state from the control interface: 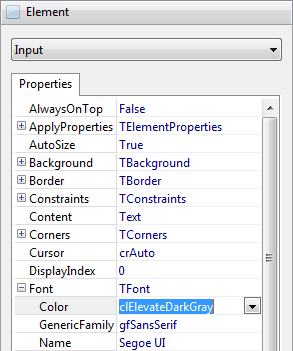 You can get context-sensitive help on any property in the element inspector by clicking on the desired property and hitting the F1 key. For more information on using the help browser, please see the Accessing Help topic.

Adding a New Element to an Interface StateControl interface states consist of one or more interface elements. The default element is, by convention, named "Base" and defined as the base container element for the interface state.

Use the following steps to add a new element to an interface state:

Selecting an ElementTo select a single element in the element designer, click on the desired element with the left mouse button. To select more than one element, hold down the Shift key while clicking on the desired elements with the left mouse button. Selecting multiple elements is desirable when one wants to resize or align multiple elements at the same time to ensure that their placement or size is uniform, or when one wants to copy and paste a group of elements.

Any time you hover the mouse over any element, tooltip information will be displayed about the element, including the name and position/size.

You can also use the mouse to directly select a group of elements using a lasso:

Resizing an ElementOnce an element has been placed on the active element's client area, you will see that the element will have designer handles on all four sides and corners of the element:

Moving an ElementTo move an element, click on the element with the left mouse button, hold the mouse button down, and drag the element to the desired location. You can also use the keyboard to move an element by holding down the Ctrl key while using the up, down, right, and left arrow keys to move the element on a pixel-by-pixel basis. Both of these techniques also work when multiple elements are selected.

Element Layout and AlignmentThe layout toolbar on the element designer can be used to adjust the alignment and layering (send to back/bring to front) of elements:

Each layout toolbar button has tooltip help that explains the purpose of the button.

Deleting an ElementTo delete an element, select the desired element in the element designer and hit the Delete key or click on the Remove Element toolbar button:

This will also work when multiple elements are selected.

Undo functionality is currently not available for the element designer, so any modifications or deletions of elements cannot be undone. Please be careful when deleting elements to ensure that one does not lose a lot of hard work. If you do accidentally delete an element, you can fix the issue by simply closing the interface without saving the modifications, and then re-opening the interface. However, this depends upon how much other work has been done to the interface since the last save point, so it is wise to save your modifications on a regular basis.