Unit ScopeThe scope of declarations in a unit are determined by whether they are declared in the interface or implementation section of a unit: 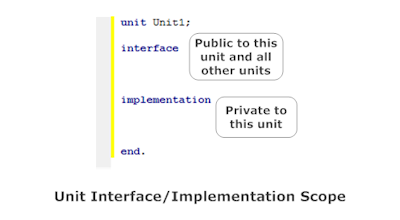 The visibility of type and class declarations is determined in top-to-bottom fashion within an interface or implementation section of a unit. For example, if the TClassA class descends from the TClassB class, but TClassB is declared before TClassA in the same unit section, the compiler will issue an error . This is because the compiler cannot "see" the TClassA declaration at the point of the TClassB declaration:


Function/Procedure Implementation ScopeThe implementations of functions and procedures only have one level of scope, and that is the scope of any parameters or local variables, as well as the special Result variable for functions. Parameters and local variables can only be referenced within the function/procedure in which they are declared.

In order to specifically reference the current instance of a class from within a class method, use the special Self keyword.

See below for more information about the various levels of scope (private, protected, public, published) within a class declaration:

Class ScopeA class declaration can have up to four different levels of scope for any member variables, properties, or methods:


Naming Conflicts and ScopeIn certain cases, the scoping rules are used by the compiler to resolve naming conflicts. For example, if the implementation of a method uses a local variable that uses the same name as a member variable of the class in which the method is declared, the local variable scope will take precedence: