The Elevate Web Builder language uses the source unit as the basis for all code in an application. As discussed in the General Architecture topic, every application has the following basic structure: 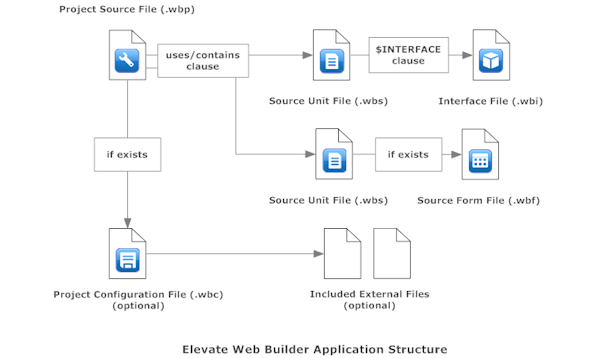 Every source unit in an application has the following structure: 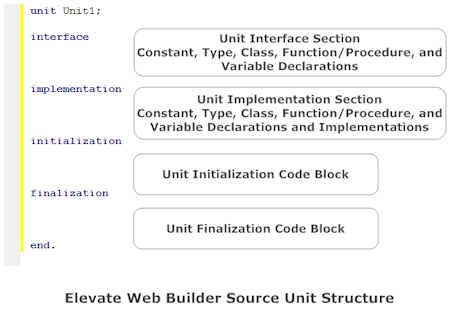 The interface and implementation section keywords are also required. The initialization and finalization code blocks are both optional, and one can be specified without the other.

Project Source FileThe project source (.wbp) of an application uses a format similar to a normal unit, but with some key changes: 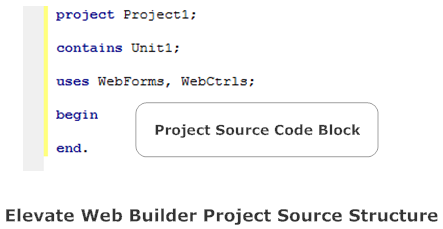 The key changes are:

Interface and Implementation SectionsThe interface and implementation sections are very similar in structure. The main differences are in the scope (visibility) of each section (private or public) and whether the section can only contain declarations and not implementation code:

Both the interface and implementation sections have the following elements in common: 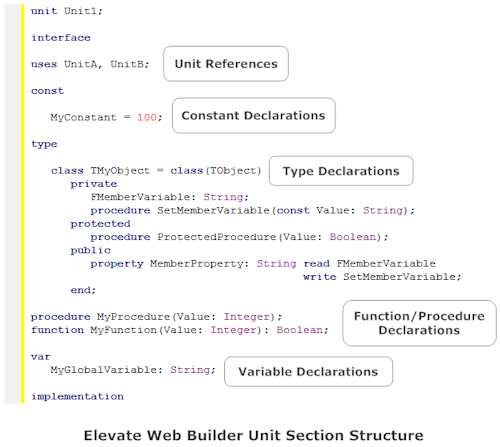 None of the various section elements are required. In fact, one can have a valid source unit that includes nothing but the unit name, the interface and implementation clauses, and the end keyword. It would be of little use, but it would still be valid.

Uses ClauseThe uses clause is a comma-separated list of source unit names (*.wbs, but specified without the file extension). This clause tells the compiler which source units are being referenced by the code in the interface or implementation sections.

Const ClauseThe const clause is used to declare constants. Please see the Constant Declarations topic for more information on declaring constants. You can declare as many constants as you wish within the same const clause.

Type ClauseThe type clause is used to declare types. Please see the Type Declarations topic for more information on declaring types. You can declare as many types and classes as you wish within the same type clause.

Var ClauseThe var clause is used to declare global variables. Please see the Variable Declarations topic for more information on declaring variables. You can declare as many variables as you wish within the same var clause.

The initialization order is as follows:

The finalization order is the reverse of the above: