Replication in ElevateDB is accomplished using several different aspects of the product and includes the capability to replicate virtually any type of data, including but not limited to, updates to databases.

The following image illustrates the general architecture of the replication of database updates in ElevateDB: 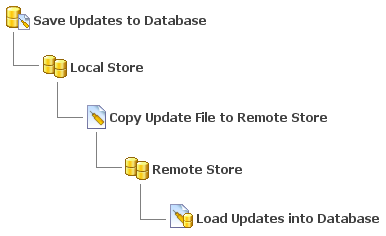 Publishing a DatabaseThe first step in configuring a replication system for database updates in ElevateDB is to publish the database(s) that you wish to replicate updates for. You can publish a database by using the PUBLISH DATABASE statement. Once a database has been published, it will begin to log all inserts, updates, and deletes that take place so that they can be saved to an update file at a later time for replicating to other copies of the same database.

Creating a Local StoreThe next step is to create a local store where the updates can be saved. You can use the CREATE STORE statement to create the local store.

Saving the Updates to a DatabaseOnce the local store has been created, you can now save the logged updates for the database to an update file in the local store using the SAVE UPDATES statement. The frequency with which the updates are saved and replicated is completely up to you, but the general rule is that you want to save the updates more frequently as the volume of updates increases in order to minimize the synchronization time.

The SAVE UPDATES statement only works with local stores. Any attempt to use a remote store with this statement will result in an error.

Replicating the Update FileOnce the update file has been created in the local store, you can now begin the process of replicating it to other copies of the same database. Typically, there are two types of replication used:


One method is not necessarily superior to the other, and the choice of which to use usually revolves around whether the remote locations are constantly accessible to the master location. If they are not, such as is the case with salesman on the road with laptops, then the pull replication is the better choice.

Loading the Updates into a DatabaseAt the remote location, we will use the LOAD UPDATES statement to load the update file from a local store into the copy of the database. The update file is assumed to already be present in the local store as a result of the previous COPY FILE operation. Once the updates are loaded, the copy of the database at the remote location is now considered to be synchronized with the database at the master location.

The LOAD UPDATES statement only works with local stores. Any attempt to use a remote store with this statement will result in an error.

You can use the FROM UPDATES clause of the CREATE TABLE statement to examine the contents of any update file. This is useful when you are trying to load an update file and cannot do so due to constraint violations or other types of problems.

Scheduling ReplicationThe actual processing of saving and loading updates, and copying the update files between different locations, can be scheduled to run as a job by using the CREATE JOB statement.

Replicating Other Types of DataThe replication capabilities in ElevateDB are not limited solely to database updates. Backups and other types of files can be replicated in a similar manner, and this is very useful for situations where you want remote locations to send backups and other important information to a master location where they will be stored in a more secure fashion than what might be possible at the remote location. It is also sometimes more efficient to use backups for the initial population of new remote locations instead of using one large update file, or a series of many update files. Being able to replicate backups is very useful in such a situation.