The layout management functionality handles all aspects of the layout of controls, both at design-time and run-time. Layout management is available for all controls in the component library, including the application surface and forms.

Control Layout PropertiesEach control in a visual client application possesses several key properties that control the layout of the control:

The TControl Left, Top, Width, and Height properties specify the defined position and dimensions of the control. These property values serve as the basis for the layout of the control, but can be modified by other layout properties such as the Layout and Constraints properties (see below).

The TControl LayoutOrder property of a control specifies the integer position of the control relative to any and all other child controls within the same container control. The layout order, as its name implies, determines how controls are positioned, relative to one another, by the layout functionality.

The TControl Layout property of a control is a class instance property that specifies several key aspects of the layout for the control via the following properties:

Please see the section entitled Layout Rectangle below for more information on the concept of the layout rectangle.

The TControl Constraints property of a control specifies any minimum and maximum constraints on the width and height of the control.

The TControl Margins property of a control specifies any margins for the control. 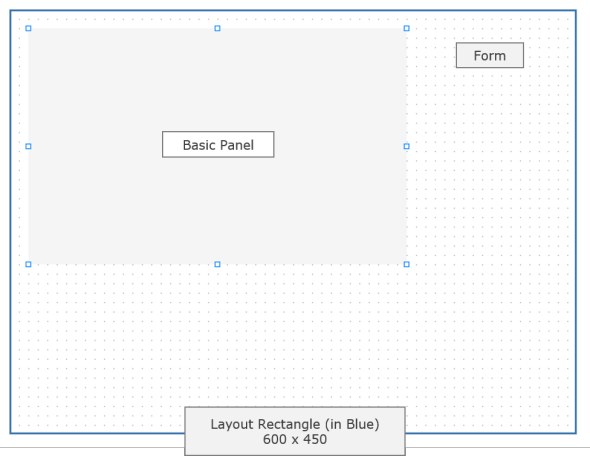 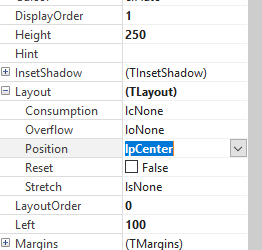 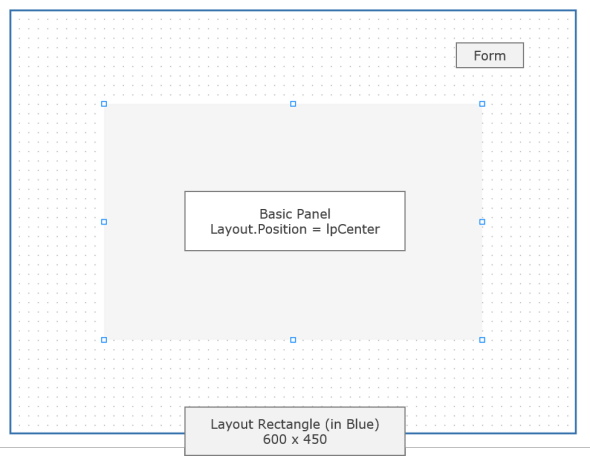 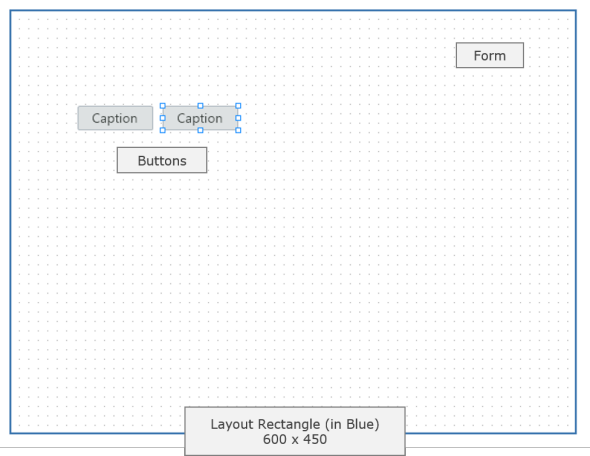 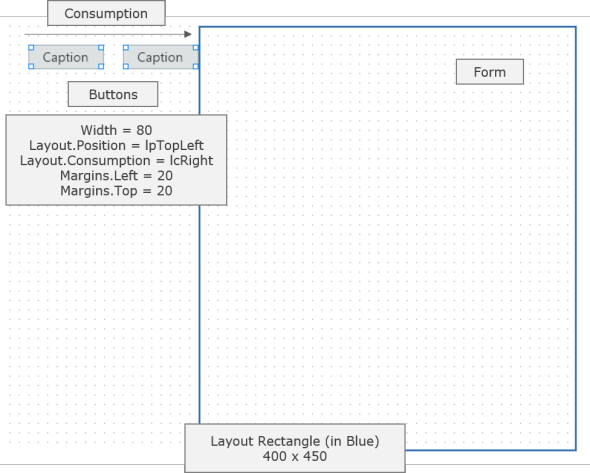 In most cases a form would not consist of just two buttons, so let's continue with the layout by placing a TPagePanel control instance on the form. 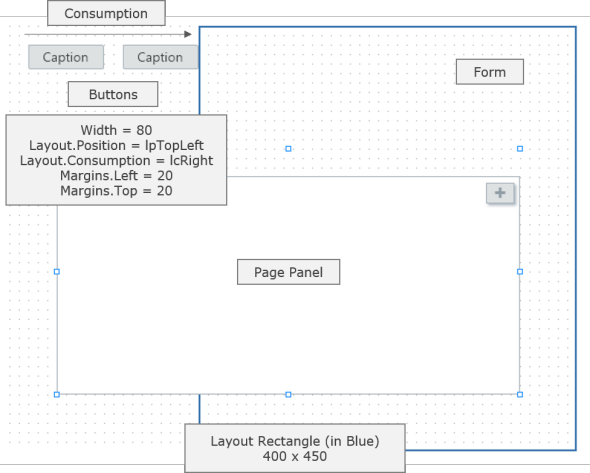 We want the TPagePanel instance to use the rest of the available space on the form below the two TButton instances, so let's specify that the Layout.Position property of the TPagePanel instance should be lpTopLeft, the Layout.Stretch property should be lsBottomRight, and the Margins.Left, Margins.Top, Margins.Right, and Margins.Bottom properties should be set to 20 pixels for proper spacing: 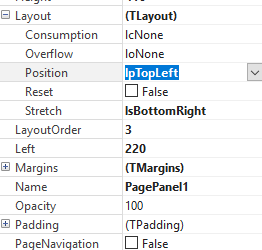 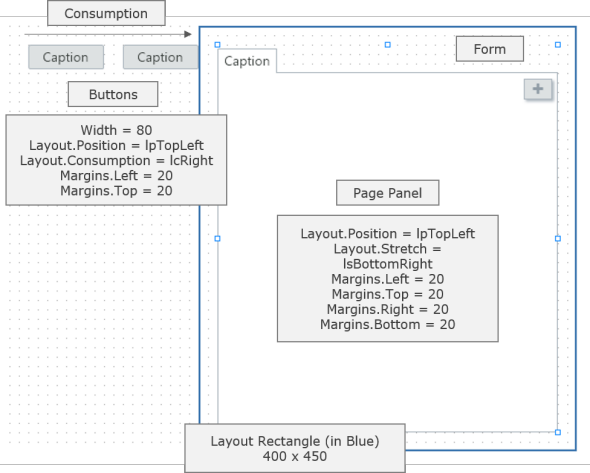 As you can see, this is not exactly what we wanted, and the TPagePanel instance is to the right of the buttons instead of below the buttons.

Changing these two properties in this manner does two things: 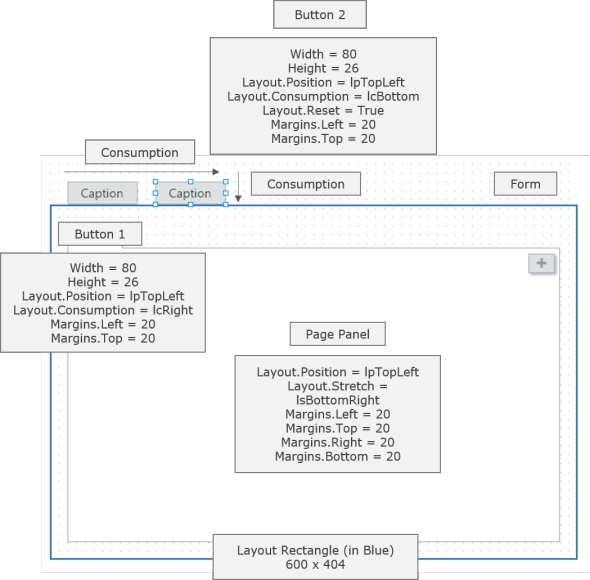 The following layout shows how you can use multiple reset points to arrange several series of controls without needing to use special container controls: 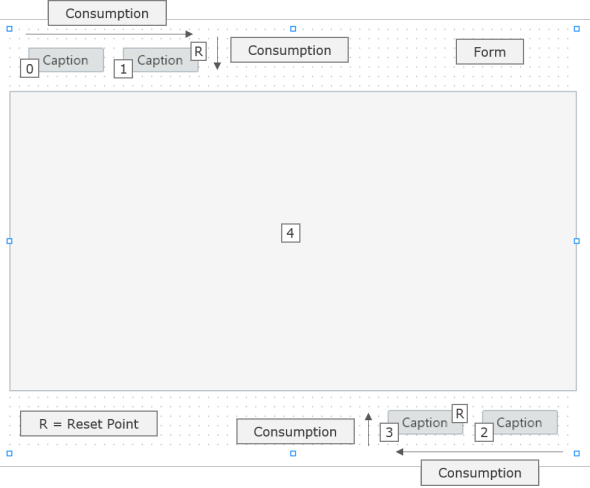 Constraints and StretchingThe defined constraints for a control are always in effect, and any attempts to modify the dimensions of the control in a way that violates these constraints will result in the modification being adjusted so that it adheres to the applicable constraint. This makes constraints very useful when combined with the Layout.Stretch property options.

This code specifies that any time the application surface vertically overflows the browser viewport, a vertical scrollbar should be shown in the browser. In addition, it sets the minimum size of the application's surface to 40 pixels taller than the main form. Combined with the fact that the surface is set to stretch to fill the entire browser viewport, these two settings enable the following behaviors:


This provides the developer the ability to specify an initial desired layout with positioning, stretching, consumption, margins, constraints, and reset points, while still allowing the layout to adjust within a container control that may dynamically resize while the application is executing.