We are very pleased to announce that Elevate Web Builder version 2 is now available for purchase and download.

Some of the new features in Elevate Web Builder 2 include: 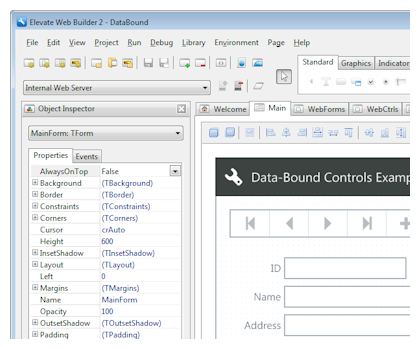 PricingPricing for Elevate Web Builder 2 is as follows:

Please use the following link to order Elevate Web Builder:

After this release, we are planning on spending a few weeks addressing any issues that may arise, and will be working on some smaller features that didn't make it into the final release. Any fixes and minor improvements will be released in new builds as they are completed.

Unfortunately, I'm still not quite finished with the Elevate Web Builder 2 documentation, so the release is going to be delayed for a few more days. I will be uploading a new preview build today, however, so that everyone can start using the release candidate product. My apologies for the delay.

These are the new features in the release candidate:

If you encounter a bug with the release candidate, please report it, but don't necessarily expect a fix before the actual release. If it's anything more than a very simple fix, I'll probably delay it until after the release. I'm planning on doing a quick minor release anyways in order to clean up any leftover issues that needs to be addressed.

If you don't see a particular feature/control property, method, or event, then it won't be in the initial release. Just submit an enhancement request and I'll work it in ASAP.